So I will keep you posted until then....

Meanwhile, take a peek on the few pix I have: participating float, onlookers / watchers who joined in the annual parade/ motorcade. Our very own CoopBank Capas Info Office also joined the motorcade giving away calendars and candies. It was fun joining the celebration! 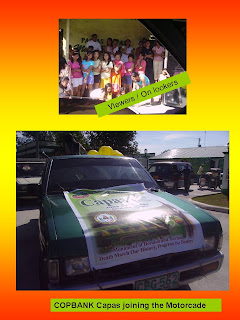 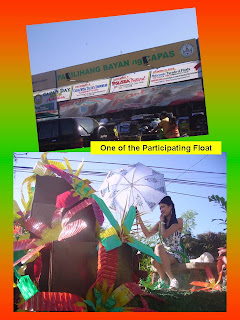 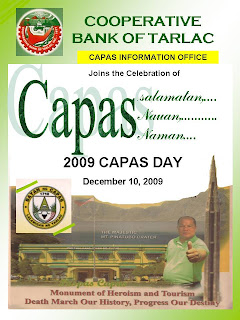 Posted by tigaCAPASku at 12:08 AM No comments: 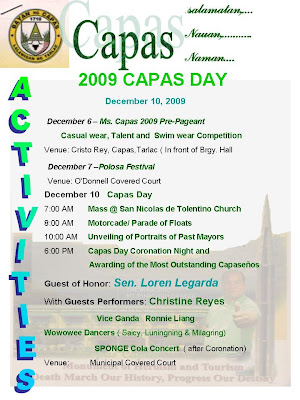 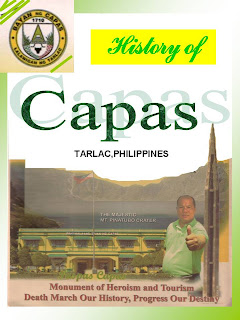 Capas as all other towns in Tarlac province was a part of vast wilderness inhabited by the Abelling tribes known as aetas. The history of Capas dates back in the late 16th century when immigrants from Pampanga, Zambales, Pangasinan and the Ilocos region flock into the settlements. Its considered as oldest town of Tarlac. Capas became a pueblo (town) in 1710 beginning as a sleepy settlement at a place between Cutcut River in Sitio Pagbatuan and Gudya (present site) founded by Kapitan Mariano Capiendo. Capas patron saint is San Nicolas de Tolentino. September 9-10 is the Capas Town Fiesta. Tarlac province was founded on May 28, 1874.

In the course of time townspeople of Capas where ordered by the Spanish authorities to change their family name of their own choosing on condition such family names begins with letter “C” , the first letter of Capas. Descendants of the early inhabitants still hold to this day such family names as Capiendo , Capuno, Capitulo , Capule, Capunpun,Cayabyab, Castañeda and Catacutan..

In the year 1850’s Capas was a part of the western Pampanga Commandancia Militar de Tarlac which includes the town of Bamban, Concepcon, Victoria, O’Donnell, Murcia, Moriones, Florida Blnca, Porac, Mabalacat and Magalang.

O’Donnell ( Patling) was then a bustling pueblo established by the Augustinians Recolletos Mission in the 1800’s named in honor of Carlos O’Donnell y Abreu, the Spanish Minister of State who visited the Patling pueblo. O’Donnell was reverted back as a barrio of Capas by the Philippine Commission of 1902 including Moriones reverted to Tarlac town and Murcia back to Concepcion. Capas is known in history as the site of the infamous death march concentration camp World War II.

Of the etymology of Capas, old folks believed it derived its name from a wild vine “ Capas-capas” or it originated from a tree called Capas in the Aetas dialect, Bulak in Pampango or Capaz in Ilocano.

Capas today is afast developing municipality in the province of Tarlac and in the region, in the fields of agriculture, commerce, industry and infrastructures. This was attained through stewardship of the set of vibrant municipal leaders whole sole Vision and Mission is embodied on their famous battlecry “ Paspas Capas”.

Situated in lahar landia of Tarlac 3rd district, Capas has a total land area of 44,000 hectares, rank 2nd to the town of San Jose. It has 20 barangays, which include the newly created barangay Cristo rey formerly name O’Donnell Resettlement.

Capas has a population of 83,961 (2005 census). It’s now a first class municipality with. It’s now a leading place in the province in terms of new business opportunities especially in the field of tourism.

Capas now is being dubbed as the “Tourism Capaital of Tarlac”. Apart form being known worldwide as the site of infamous death march, it’s now popularly known for “Mt. Pinatubo Trek” where thousands of mountaineers and visitors go to.

A new golf course is also fast developing, the new Asia Golf and Spa. Upon completion, it will be a haven for golf aficionados. Capas is also the site of Arm Forces of the Philippines Light Armor Brigade ( LABde) HQ located in Sta. Lucia. It is also the training center for the Philippine Army and United Nation peace keeping troops.

The continuing mushrooming of various fast food chains along Mc-Arthur Highway in Capas like Mc Donalds, Chowking , Jollibee, Coconut Grill and supermarkets like Massway, Unistar and housing subdivisions have greatly added to the income of Municipality. The Purina Mills Inc. (PMI) is considered to be the biggest single business company in Capas.

Capas today under the leadership of Mayor Reynaldo Lopez Catacutan has continuously led this former Marlboro Country to what it is today. Gone were the days that whenever the word Capas is mentioned, it connotes death march, massacre, killing fields, birth place of insurgency, laharlandia. As Mayor’ ReyCat’s battlecry “Paspas Capas”, the dream of yesterday is now a reality. It’s now a showcase of fast rising community full of hope and aspiration. Years form now, Paspas Capas is envisioned to be the second city of the province of Tarlac.

“All of this progress and development are all attributed to my Cabalens, Sangguniang Bayan and political leaders whose magnanimous supports to my administration has contributed much to the growth we had attained”, says Mayor ReyCat.


Based on: Tarlac Book 2007 Yesterday's History, Today's Legacy by VER BUAN
Posted by tigaCAPASku at 7:40 PM No comments: